Study of Lifespan of Butterfly Adult Stages in Captive Environment

Study of Lifespan of Butterfly Adult Stages in Captive Environment 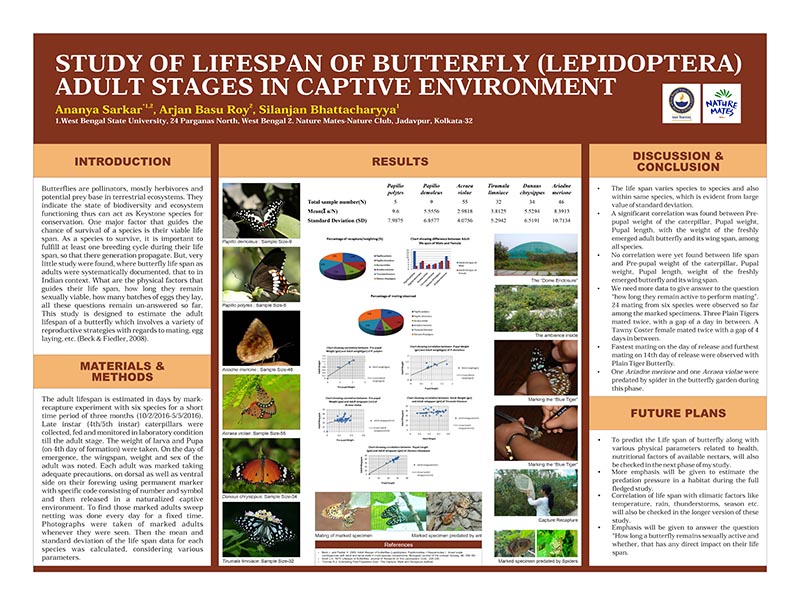 Butterflies are pollinators, mostly herbivores and potential prey base in terrestrial ecosystems. They indicate the state of biodiversity and ecosystem functioning thus can act as Keystone species for conservation. One major factor that guides the chance of survival of a species is their viable life span. As a species to survive, it is important to fulfill at least one breeding cycle during their life span, so that their generation propagate. But, very little study were found, where butterfly life span as adults were systematically documented, that to in Indian context. What are the physical factors that guides their life span, how long they remain sexually viable, how many batches of eggs they lay, all these questions remain un-answered so far. This study is designed to estimate the adult lifespan of a butterfly which involves a variety of reproductive strategies with regards to mating, egg laying, etc.

The adult lifespan is estimated in days by mark recapture experiment with six species for a short time period of three months (10/2/2016-5/5/2016). Late instar (4th/5th instar) caterpillars were collected, fed and monitored in laboratory condition till the adult stage. The weight of larvae and Pupae (on 4th day of formation) was taken. On the day of emergence, the wingspan, weight and sex of the adult was noted. Each adult was marked taking adequate precautions, on dorsal as well as ventral side on their forewing using permanent marker with specific code consisting of number and symbol and then released in a naturalized captive environment. To find those marked adults sweep netting was done every day for a fixed time. Photographs were taken of marked adults whenever they were seen. Then the mean and standard deviation of the life span data for each species was calculated, considering various parameters.

The life span varies species to species and also within same species, which is evident from large value of standard deviation. A significant correlation was found between Prepupal weight of the caterpillar, Pupal weight, Pupal length, with the weight of the freshly emerged adult butterfly and its wing span, among all species. No correlation were yet found between life span and Pre-pupal weight of the caterpillar, Pupal weight, Pupal length, weight of the freshly emerged butterfly and its wing span. We need more data to give answer to the question “how long they remain active to perform mating”. 24 mating from six species were observed so far among the marked specimens. Three Plain Tigers mated twice, with a gap of a day in between. A Tawny Coster female mated twice with a gap of 4 days in between. Fastest mating on the day of release and furthest mating on 14th day of release were observed with Plain Tiger Butterfly. One Ariadne merione and one Acraea violae were predated by spider in the butterfly garden during this phase.

Previous Story
A study on roosting behaviours in butterflies
Next Story
House Sparrows are Vanishing: A result of non-inclusive urban planning