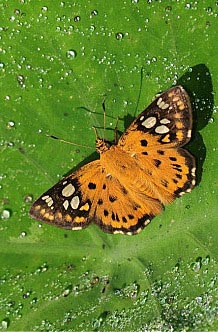 The state of Tripura is situated in the south-western extremity of north-east India. It shares an international boundary with Bangladesh on its north, south and south-eastern part; whereas on eastern side it shares a common boundary with two Indian states, Assam and Mizoram respectively. The state is located in the Bio-geographic zone of 9B-North-East Hills and has a predominantly hilly terrain with an altitudes ranging from 50 to 3080 ft above sea level. As because, it is geographically situated in the Indian sub-region of Oriental Zoo-geographic region, therefore possesses a very close affinity and resemblance with floral and faunal components of Inda-Malayan and lndo-Chinese sub- regions. Tripura is not a big state with an area covering only 10,491 .69 sq. km., but around 60% of that area has forest cover. The main forest types are tropical evergreen, semi evergreen, and moist deciduous; also sizeable area is covered with bamboo brakes. Tripura is extremely rich in bio-diversity point of view. However, little studies had done on its butterfly diversity. Keeping that in consideration, one preliminary survey for butterfly fauna was planned during October-November 2009. During this seventeen days long survey period, a large part of the state was covered. An amazing 196 species of butterflies from five different families were recorded from different habitats such as plantation, cultivation and natural forests. Nymphalidae was the dominant family, with most number of species (81), followed by families Lycaenidae (44), Hesperiidae (39), Pieridae (18) and Papilionidae (14) respectively. Among the recorded butterfly species, some of them are protected under different schedules of the Indian Wildlife Protection Act, 1972. During the study, more number of species was recorded from the natural forest area which supports a large diversity of flora. The results showed that the change of environment quality and altitude influenced the diversity of butterfly remarkably. The diversity pattern shows extreme richness in the Jampui Hills region, whereas in Sepahijala Wildlife Sanctuary it is considerably low. The other regions of Tripura show moderate diversity of butterfly species. The result also indicates that the fragmentation of habitat and the overall degradation of habitat quality have tremendous impact on Butterfly diversity. The present information will be helpful for further detailed study on butterfly diversity of this region.

Previous Story
Biodiversity Gardening : A Tool to Involve Common People in Conservation
Next Story
Scientific Note: Blending with the background: very unusual background-matching behavior of a caterpillar of Ariadne merione (Nymphalidae) in captivity