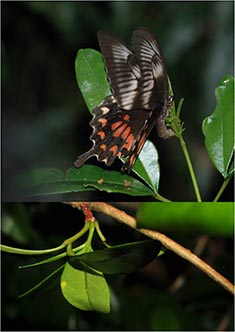 Butterflies have been used in different parts of the world in biodiversity assessment programmes. Studies have shown that several ecological characteristics make butterflies promising biodiversity indicators: (i) due to short (typically annual) life cycles they are more sensitive than other groups to changes in their habitats (ii) breeding even in small habitat patches, they are likely to reflect changes occurring at a fine scale (iii) they may be expected to be representative for a wide range of terrestrial habitats, and, more importantly, to be adequate indicators for many groups of terrestrial insects, which themselves constitute the predominant fraction of biodiversity. Like most phytophagous insects, larval diet of butterflies is strongly associated with metamorphosis and future fitness of the adult. On the other hand, exploration and conservation of new host plants are primary requisites for the conservation of butterflies as well as indicate the scope of range extension for a particular species. Thus, host plants play a major role in reproductive success and conservation of butterflies. This is the first scientific report of Ravenia spectabilis Lindl. (Rutaceae) as a host plant of two Papilionid butterflies (Papilio polytes and Papilio demoleus Linn.), recorded from Bibhutibhushan Wildlife Sanctuary and The Fort Raichak, West Bengal, India. Date, time, location (Latitude and Longitude), and photographic evidences of the first observation were recorded during field trip. Later, eggs of the butterflies along with the leaves were collected from wild, reared in laboratory using R. spectabilis as larval feed and released back again in wild. Complete life cycle events of both the species of swallowtail butterflies were performed in an experimental set-up (N= 30) to record temporal landmarks of metamorphosis. Relative water content and protein content of the leaves were measured to get an idea about the nutritional quality of the leaves. During laboratory rearing, mean oviposition- Eclosion duration was recorded which indicated that P. demoleus completed its life cycle slightly faster than P. polytes. However, the duration of egg stage was not found to be directly correlated with the host plant but the total duration from oviposition to eclosion of these papilionid butterflies in R. spectabilis was found to be very much comparable with the other known host plants of papilionidae such as Citrus limon, Murraya koenigii etc. The survival rate and growth of the caterpillars were also satisfactory. Water content and protein content of R. spectabilis leaves reflected a good nutritional quality as larval feed. Exploration of novel host plants would surely add new information and fortify prospects of lepidopteran conservation as a whole.

Previous Story
An Assessment of the Effect of Light Pollution on Roosting of Butterflies: Do Butterflies Get Disturbed by Artificial Light?
Next Story
Role of NGOs to Protect Environment